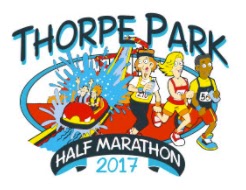 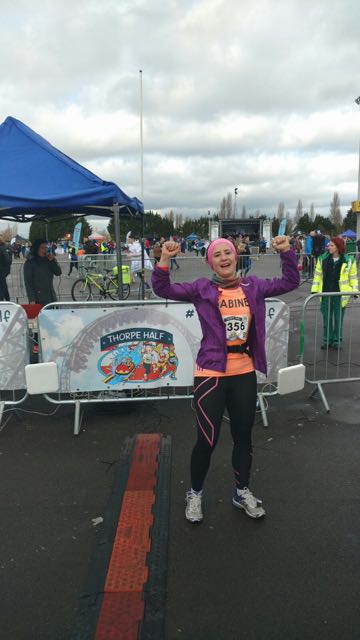 So glad I signed up for this race. At the moment each week passed so quickly and if I haven’t signed up this race, my training would have been close to zero.

Funny enough, I found out about the race from my colleague who signed up with friends and family. Sure I join, as I wanted a race early in the year. Only a few days before the race I actually checked how to get to Thorpe Park. It’s quite far from central London by train. The bus shuttle from the train to the park wasn’t running as the park was closed during winter.To get there was 1.5h door to door. What a bummer, I thought. But then a Facebook group was set up for car sharing. Luckily I found a driver in SW London that I could join. 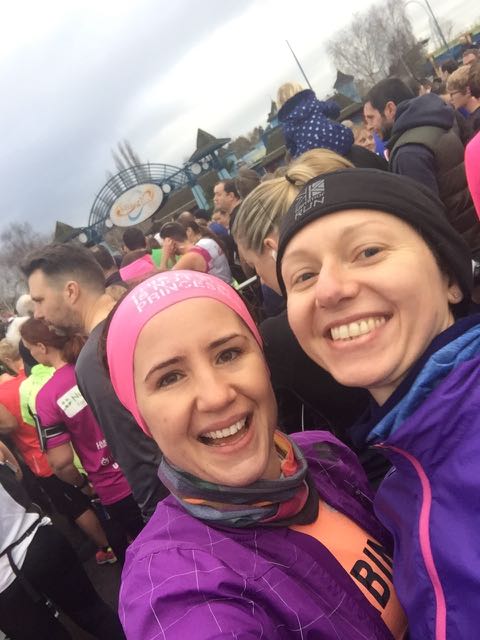 It was a grey race day, no rain. My friend Mary ran her first Half in Edinburgh with me last year. When she finished, she fancied to sign up for another one. We met up, I gave her a Novice Half Marathon training plan, nutrition advice and she did it. I was so proud. Now here we go again.

Due to work and personal challenges my training was less frequent. I didn’t feel as trained but I knew I could do it. I decided to run with Mary and pace her throughout the race. For me it was a great run to enjoy and also focus on a steady pace for the two of us. Knowing that my pace last time finished 2:10h (running with a fast friend), and my first ever Half 2:20 I was hoping to finish somewhere in the middle. Mary thought 2:30h as that was her last finishing time, but I had a feeling we can do better. 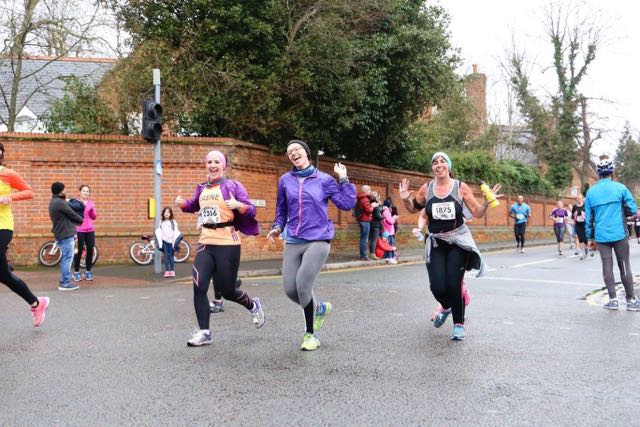 Pic by Thorpe Half: The purple duo, Mary and me running together the whole race. She got her new PB.

The course started and finished at Thorpe park. Unfortunately, didn’t go though the park at all. It was a road race and advertised as flat and one of London’s fastest pre Marathon courses. But there were lots of inclines, those one that feel long and steady up hill. But hey, that mad  it more challenging and exciting. Otherwise it might have been just a boring road race. Yes there was lovely country side, but on the same time city and cars around us too.

We managed it well, had our 2 gels at km 7, 15 and were enjoying each others company. Throughout the race I kept coaching Mary to relax her shoulders, focus to engage her bum. There was a time when we both felt the fatigue as the longest training run was 15km. A niggle in my leg always comes up but I leant from previous races to be patient, it will go away. And it did. Few km before the finish I felt strong again. I tried to motivate Mary to stay with me, as she tent to slow down a bit. “Just go, I see you at the finish line”, Mary said, and I went off. My pace picked up and I felt great. It was only for 2km, but it’s good to push when you feel strong at the end. Hopes came up to finish with a good time, so I pushed and focused. 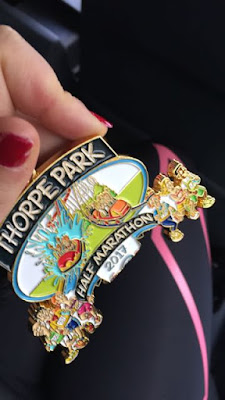 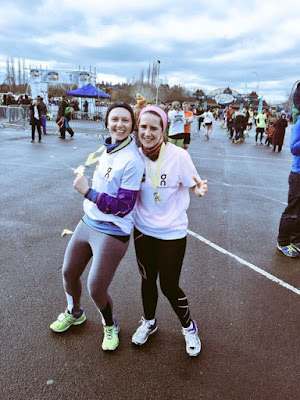 We both enjoyed running together and I was so excited to see her great performance and cutting down 10 min of her last race time. Well done!

On the way back I was chatting to the other runners I was sharing the car with. There were mixed opinions about the course and disappointment not running trough the park and maybe have a free ride at the end. 🙂

We were discussing the surprise of so many inclines and all of a sudden we read the FB comments about the medal. “My medal looks like there is something missing at the bottom and it has quite sharp edges.” Everyone was so excited after the finish and we didn’t realise that a part of the medal was cut off. All the way back home in the car I read the conversations about the missing part. People were disappointed and wandering why and what happened. It was the logo of Thorpe Park that was cut off. An apology and explanation came in an official email the next day. The trademark for the official logo was not approved in time for the event.

A sad situation for the organiser and the runners but this was the first time the event was taking place at Thorpe Park and I guess many lessons were leant.

I enjoyed my run with my friend. Not sure if I would run it again as it’s just too far out and not easy to get to without a car.

I’m always up for a challenge and have already a new Half Marathon lined up in Tenerife in June.

Thanks for reading. The above are my honest and own opinion.