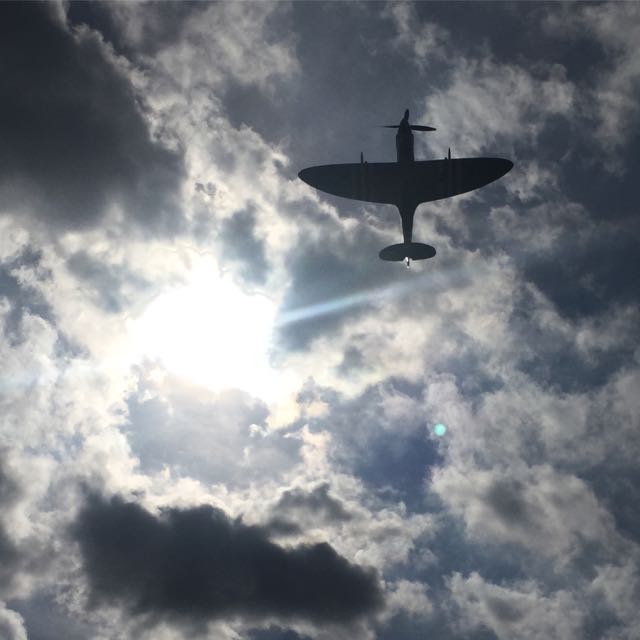 One team member must be on the course at all times during the 24hrs.

Runners must complete one full lap before changing over with a teammate but may run 2, 3 or more laps at a time before changeover.

The team with the most laps wins.

You have the option to run as a team woman, men or mixed category. Or for the big challenge just run solo and see how many laps you can get in 24h. 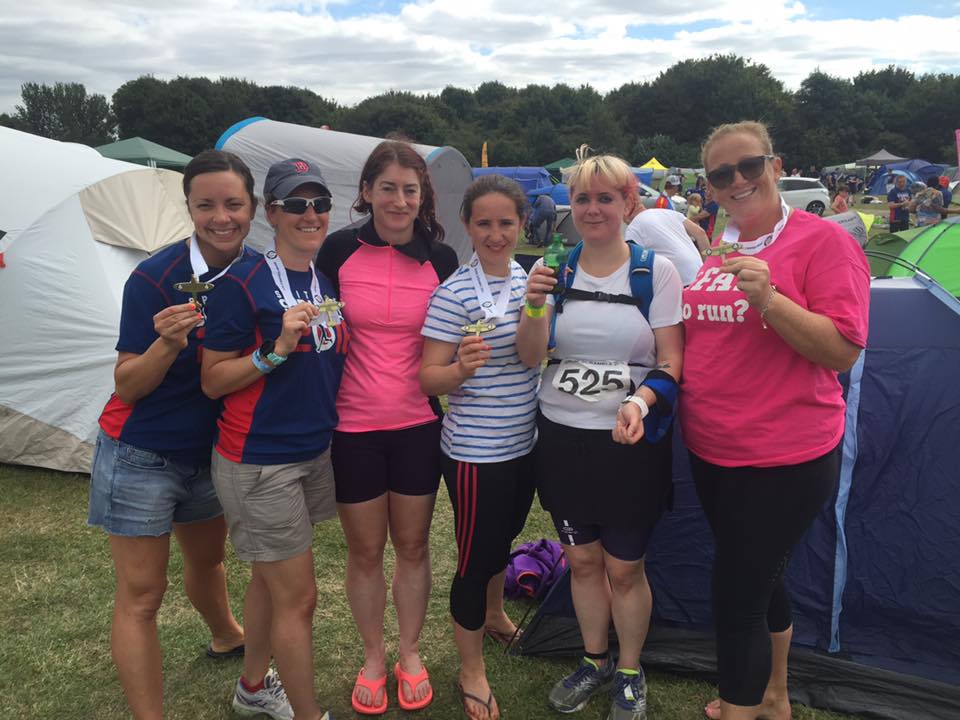 I did it again! Last years race was already fun and this year was even better.

I teamed up with UK Fitness Blogger. Actually this was my anniversary with the girls as we have met a year ago at this race!

So I know these awesome ladies for a year now:

Corey, I have never seen a power women like her before. She was diagnosed with Diabetes Type1 a few years ago, but she is managing this challenge so well, nothing can stop her.

Mollie, she gets the “my new running buddy 2016” award. We will run the Berlin Marathon together 2016. We also ended up running last weeks Dublin Half together and now the 24h relay team challenge.

Kat,  is seriously into running like doing a 100 miler just for fun and she loves her gadgets. This year she was not only running in my team, she also supported her boyfriend Jools and paced him trough the night. She must have done 8 or 9 laps!

Hellen is the founder of UK Fitness Blogger community and she got the team together. Besides her passion for running and bowling she is also a loving mom.

Julie, she was our new team member and has done more Marathons than I have. Julie was thinking to do the 24h race as a solo runner in 2017. Impressive and inspiring! 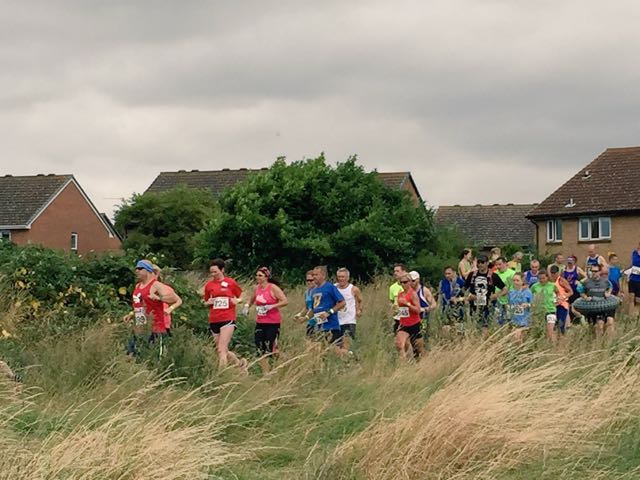 Pic: 12pm start of the race with Julie doing the first round. 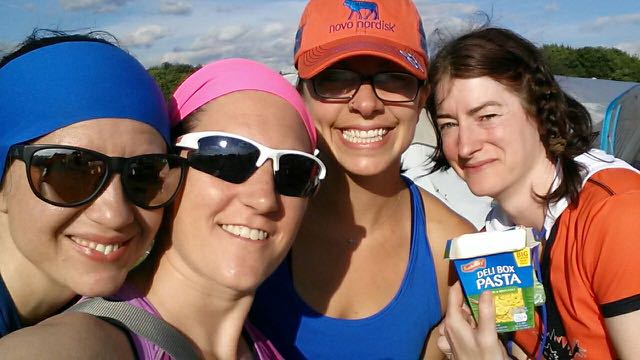 Pic: Waiting till the next relay handover… Me, Mollie, Corey and Kat. 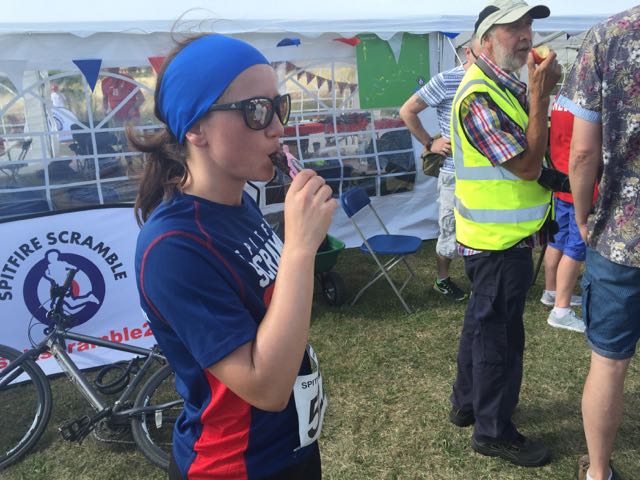 This year I was on quite late. Waiting and watching the others run made me feel so excited. In the meantime I was snacking, taking selfies or snap chatting.

Enjoyed The Primal Pantry Paleo bar on this pic above. Thanks for the taster pack! All UK followers can enjoy 2,- off the taster pack just use the code “spitfirescramble”. 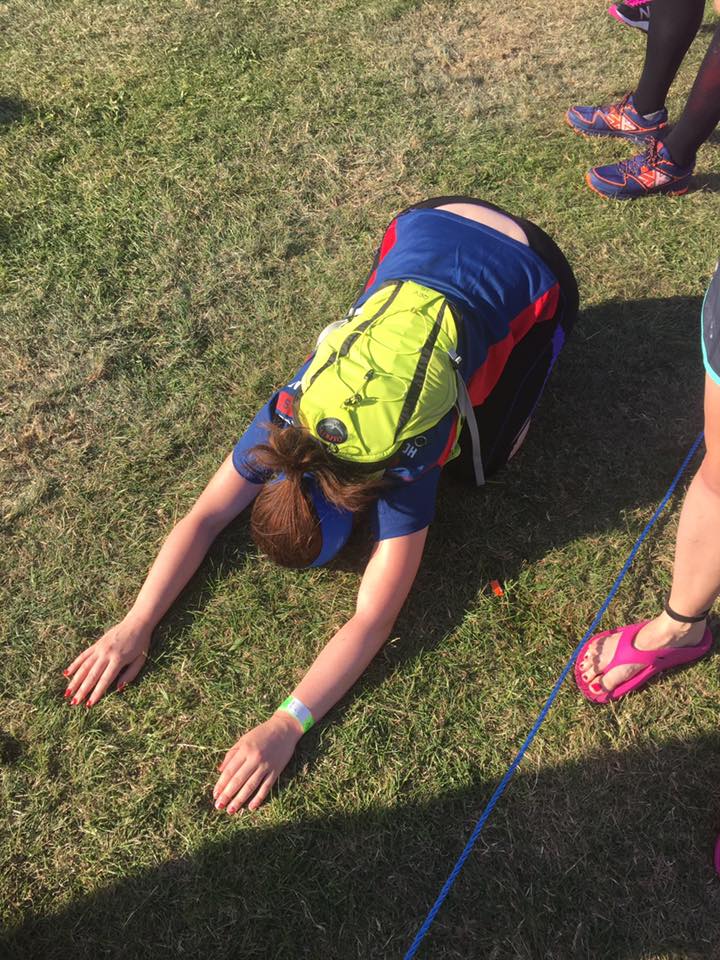 Always warm up before a run! I had a fun relaxation Yoga pose 🙂 too hahah 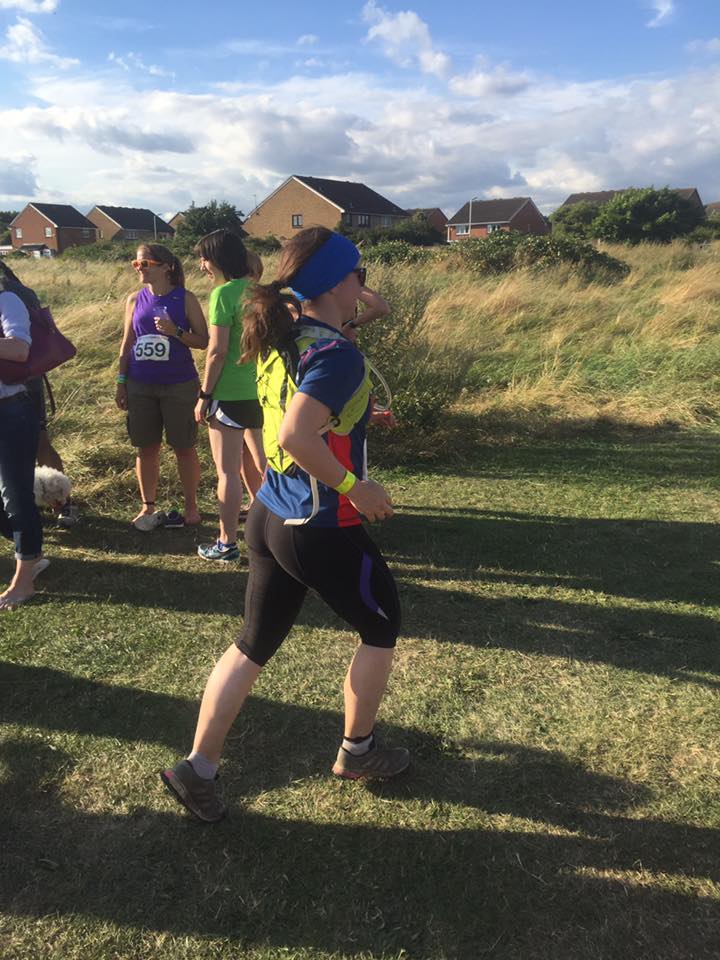 Pic: First and only run at daylight. 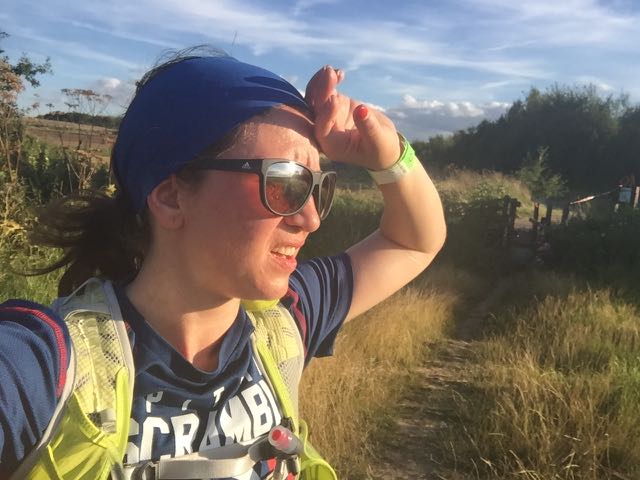 Finally I was on my first run. It was 5:30pm and the sun was very low. I hardly could see at some parts of the course as the sun was still burning right into my face. I felt hot and was glad I ran with my small hydration pack which I used last year as well. I love the feeling of being able to drink whenever I need it. Especially that day was so hot in the afternoon  that the Ospray pack was well in use. 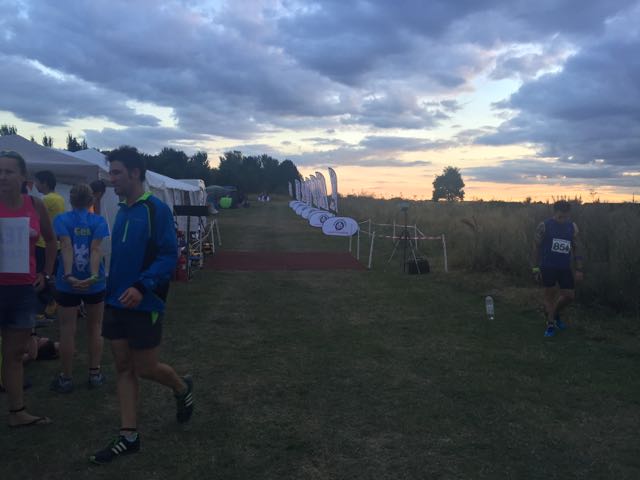 It started to get dark and I had another long wait until my 2nd run. Mollie, Kat, Corey and I were running trough the night. Everyone did 2 laps that kept us going until the sunrise. Julie and Helen were taking on the morning hours. 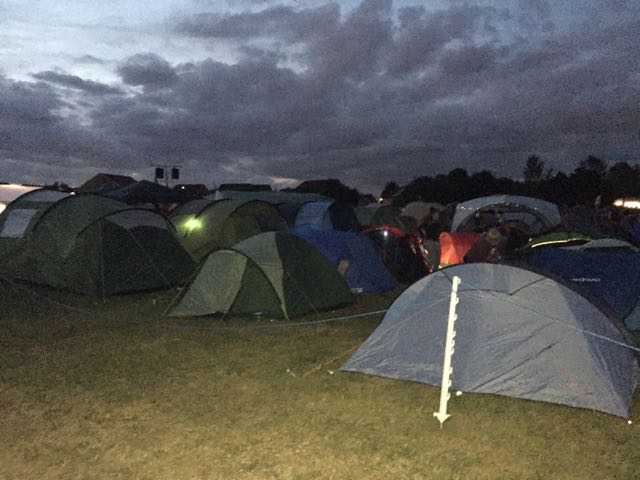 The atmosphere was awesome at night. We all had a head torch and the very bright Knuckle Lights. Please find my review CLICK here.

You can see in the pic how awesome it looked! Mollie had also a pair of lights on her shoes which I borrowed. It looked like in disco when she ran towards me and everyone at the start line was cheering. We all need these lights for next year! I absolutely loved them. 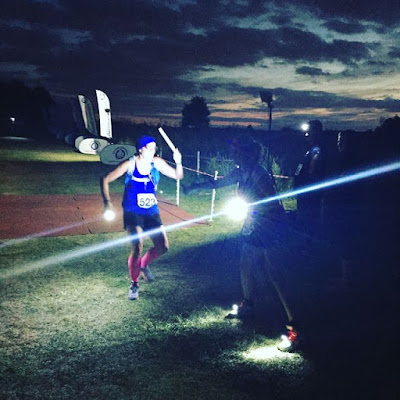 Why do I love running at night, in the dark? It’s the thrill, the piece and quiet. I nearly felt it was like a meditation.

But running at night also means you have to concentrate and watch your steps. It’s easy to trip over however with the right lights you are fine. On the course it happened that the teams were spread out quite a lot. That meant I ran on my own. It was just me in the dark running trough the forest and the field. The quietness was so enjoyable, I felt very calm but also excited. I think I had an extra adrenaline rush using the awesome lights. My legs were a bit tight already and was looking forward to a massage booked after that run.

Check out this video I managed to capture during the night run.

With all that excitement I felt during the first night run, I got lost. I missed an arrow or maybe there were not enough? It was dark and when you look down it can happen to miss a sign. Instead of turning around and running back I tried to find my way back onto the course. I felt so angry when I realised I skipped a part of the course. I immediately called Mollie who would be the next after me. I took my time did a slow jog and enjoyed the run. Mollie had a shorter break and rocked her 2nd run. 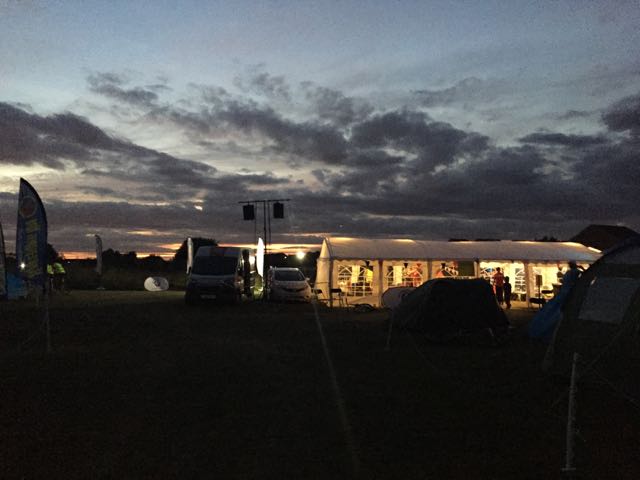 Back at the camp side I had 2 hour until my next night run. A short leg massage and I was in my tent trying to relax. I lay down in my sleeping bag but no chance to fall a sleep. The neighbours were talking loudly, I even heard them though my earplugs. But after a run and a gel you just not tired enough to sleep.

My 2nd run I made sure I didn’t miss any of the course. It felt I had the longest run ever. My legs were so heavy. Last week I did a Half Marathon in Dublin but doing the same distance and more split into 3 runs, was hard. 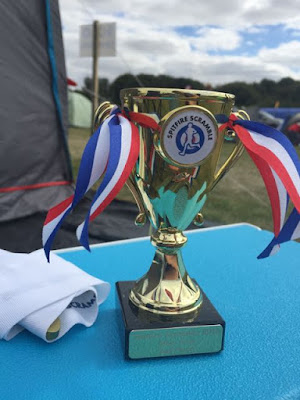 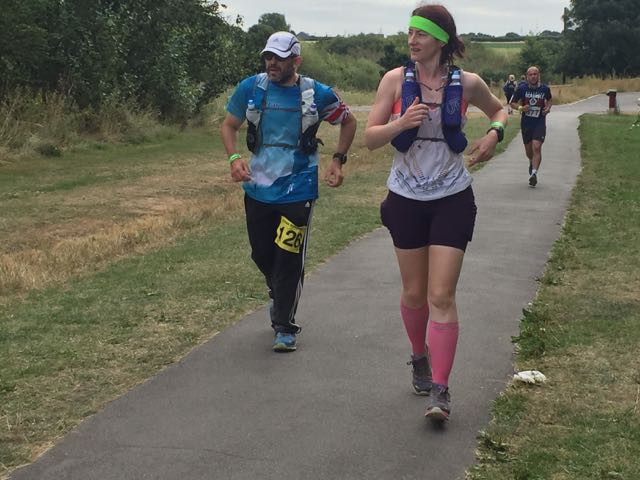 Congratulations to Jools who won 2nd Place in Men Solo supported by his girlfriend Kat who was my team member. Awesome achievement!

How exciting being on a team relay race. The atmosphere felt like a mix of camping and festival but not too crazy. Fun  we had and we will do it again next year! Check out this big bling! even bigger than last year! What made it so special was that the Spitfire actually flew over us!

Come and get yourself in a team for next year! 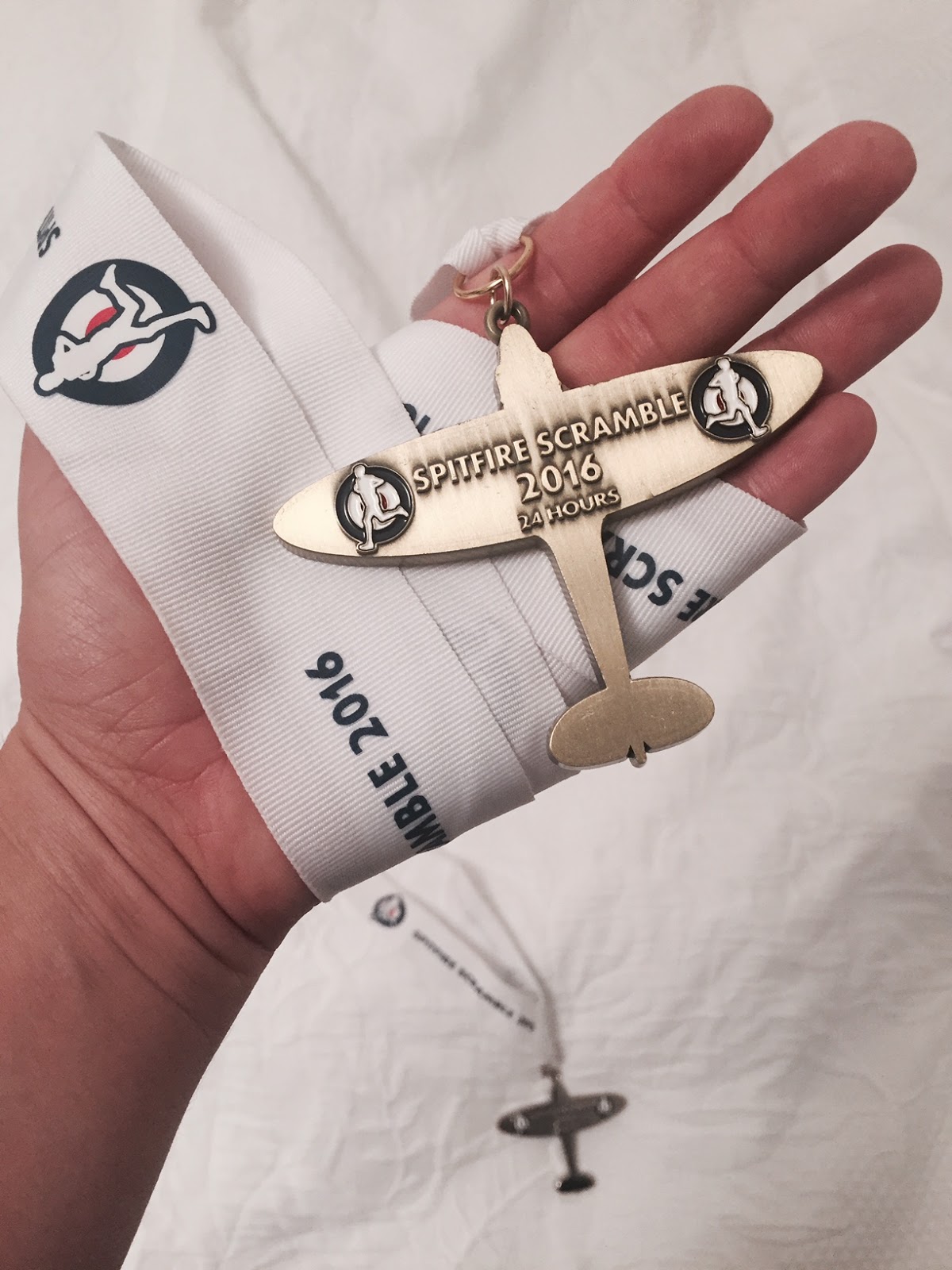