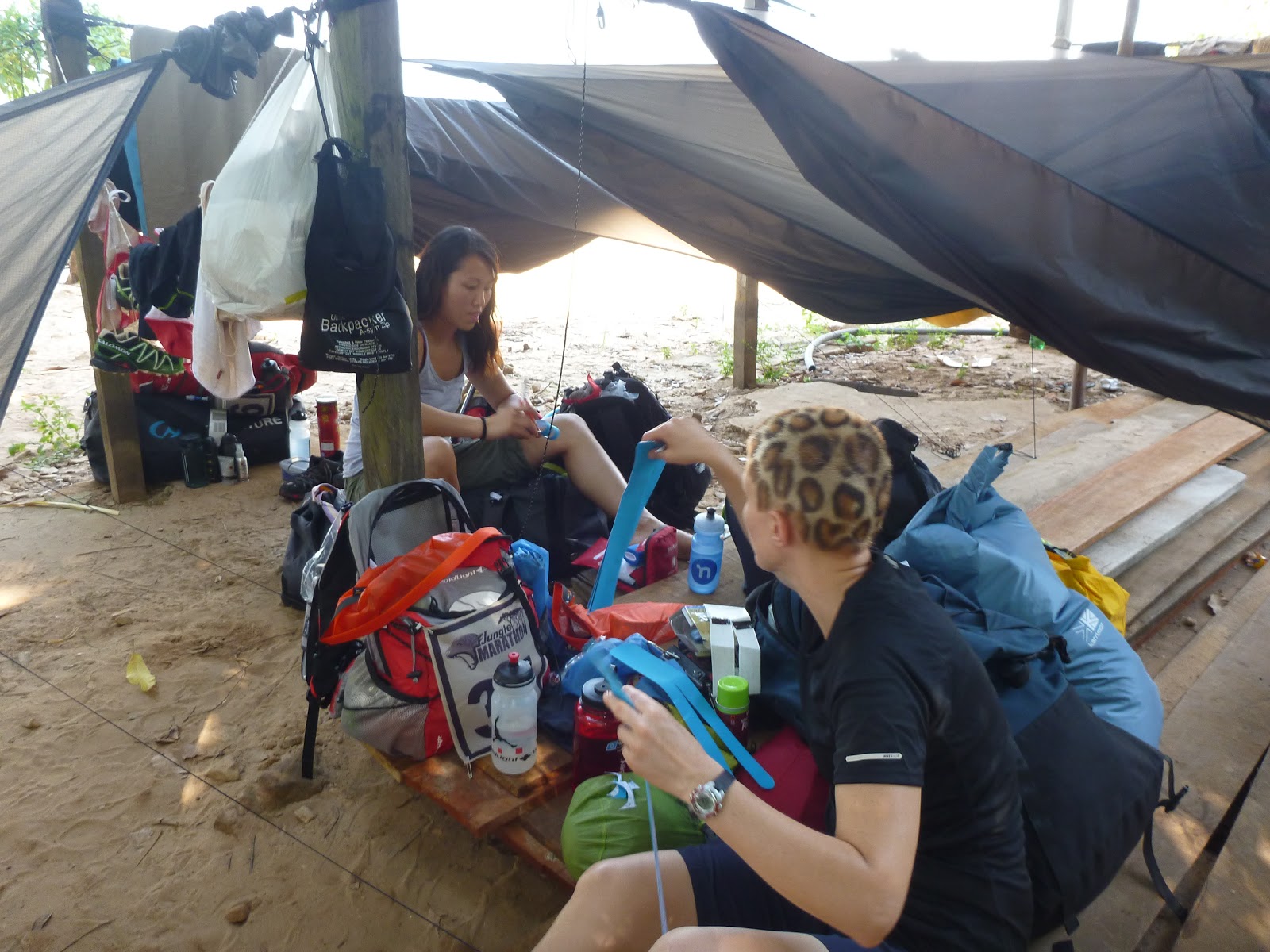 It was still dark and very early in the morning when I heard the first people packing their belongings together. Getting ready was mostly 1,5 – 2 hours before the start. Getting the hammock down, having breakfast and packing the day food into my front pack – that was the early morning routine each day. But the most wired thing was to get into the wet cloth, as nothing really dries over night in the Jungle.

Some of the competitors came to me for a chat how impressed and proud they were about me being out in the Jungle for such a long time. People who were running or even fast hiking came in much earlier to the base camp and had more rest during the day compared to me walking /running slowly and taking pictures every now and then. Therefore they were very impressed and encouraged me to keep on going.

I felt very emotional that morning with all these lovely people around me; everyone was taking care about each other.

The first challenge was to cross a river (100m). We had the option to hold onto the rope or swim across. Like the day before I put all my stuff into my dry bag including my shoes. My bag was floating behind me and I was just swimming easily and overtaking a lot of people. They were swimming with the backpack on their shoulders with the aim to save some time. On the other side of the river I dried my feed, added power and put on my shoes. It took me 6 min but on the end I was able to run the whole day with dry feet. 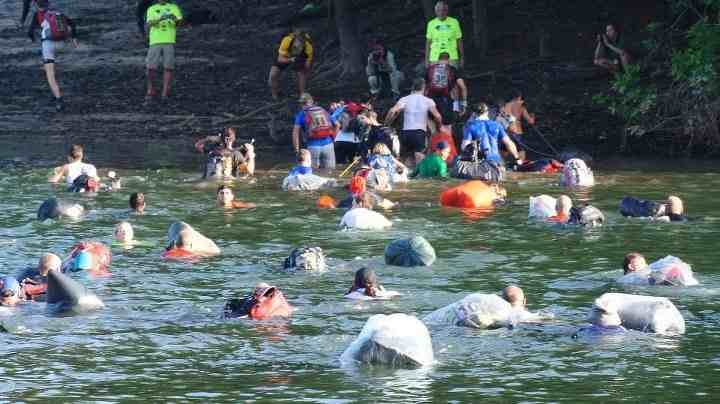 My top recommendation: Take your time to sort out your feet. That will help you to stay longer on your feet without any blisters. That might be the reason why I finished my race without any injuries and no serious pain. 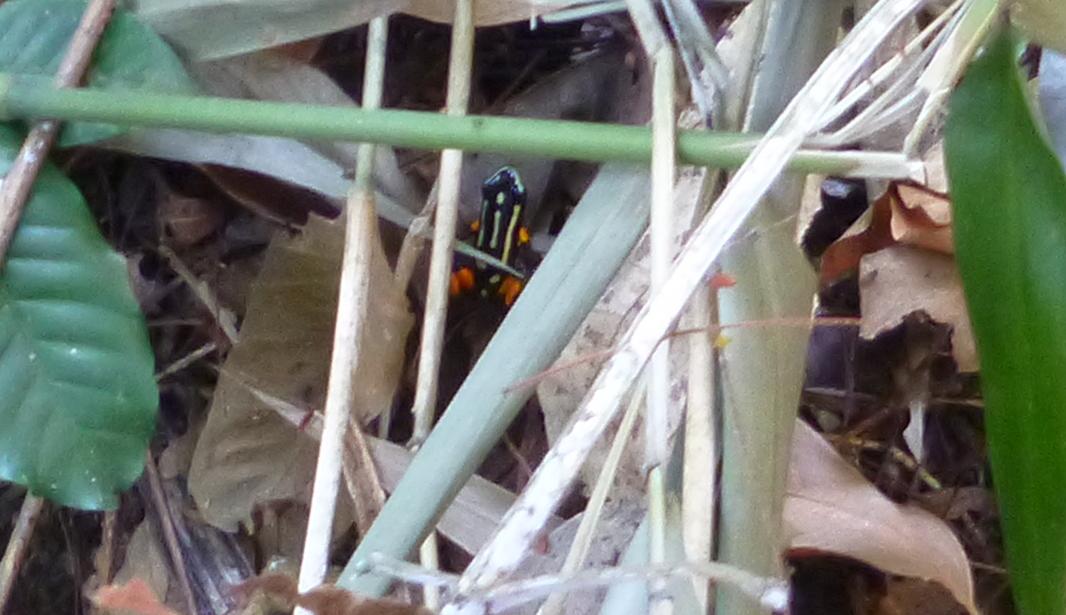 Small poisoned frog I spotted in the deep jungle.

Happy and very motivated I started running straight away and even managed to overtake a few competitors in the beginning. The terrain was hilly, flat, in the Jungle and out of the Jungle along a road. It was beautiful and hard work for everyone. After a while I met my friend Tony again and he was struggling with the heat and the hills. I was worried and unfortunately he dropped out later that day. 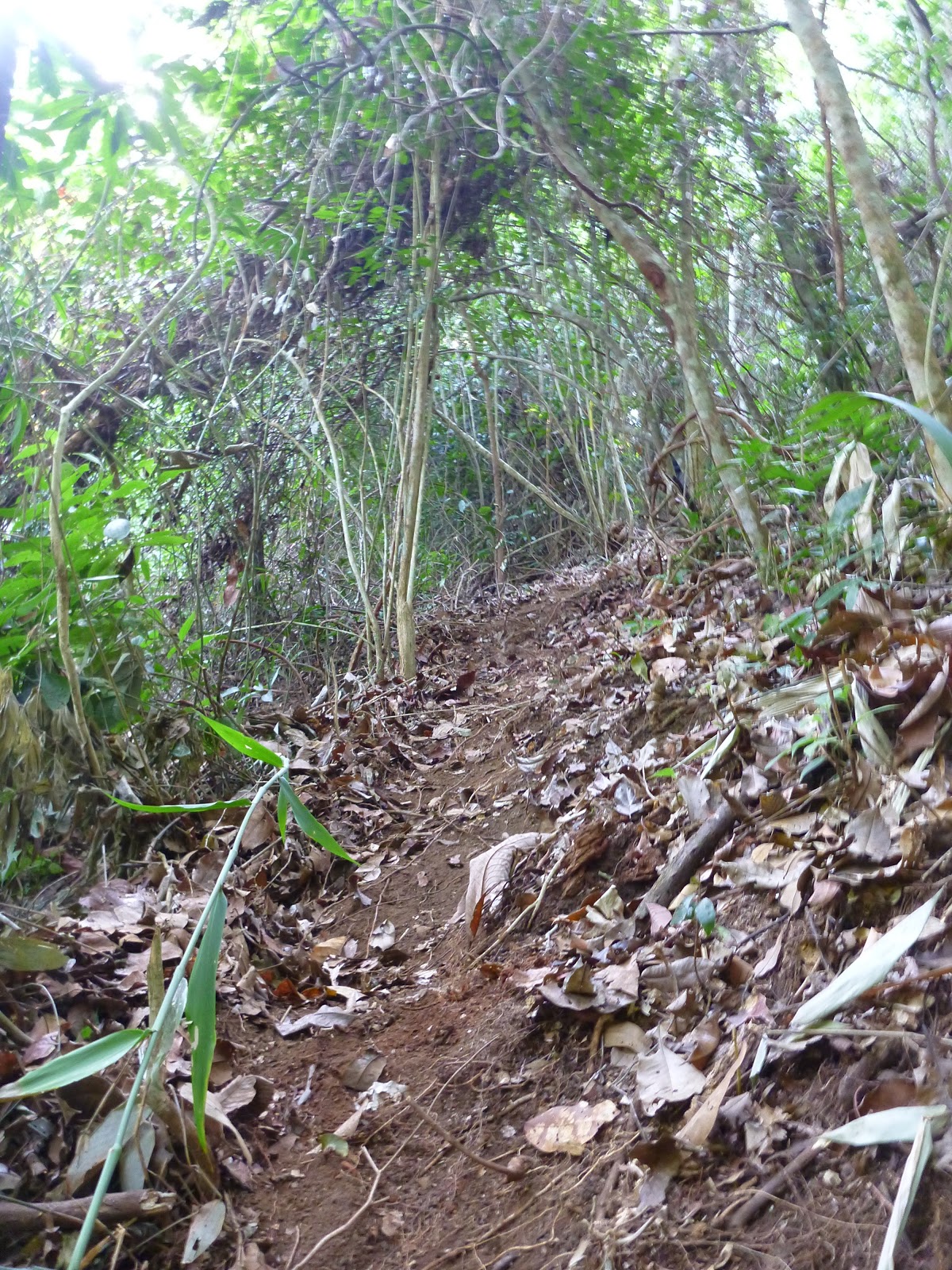 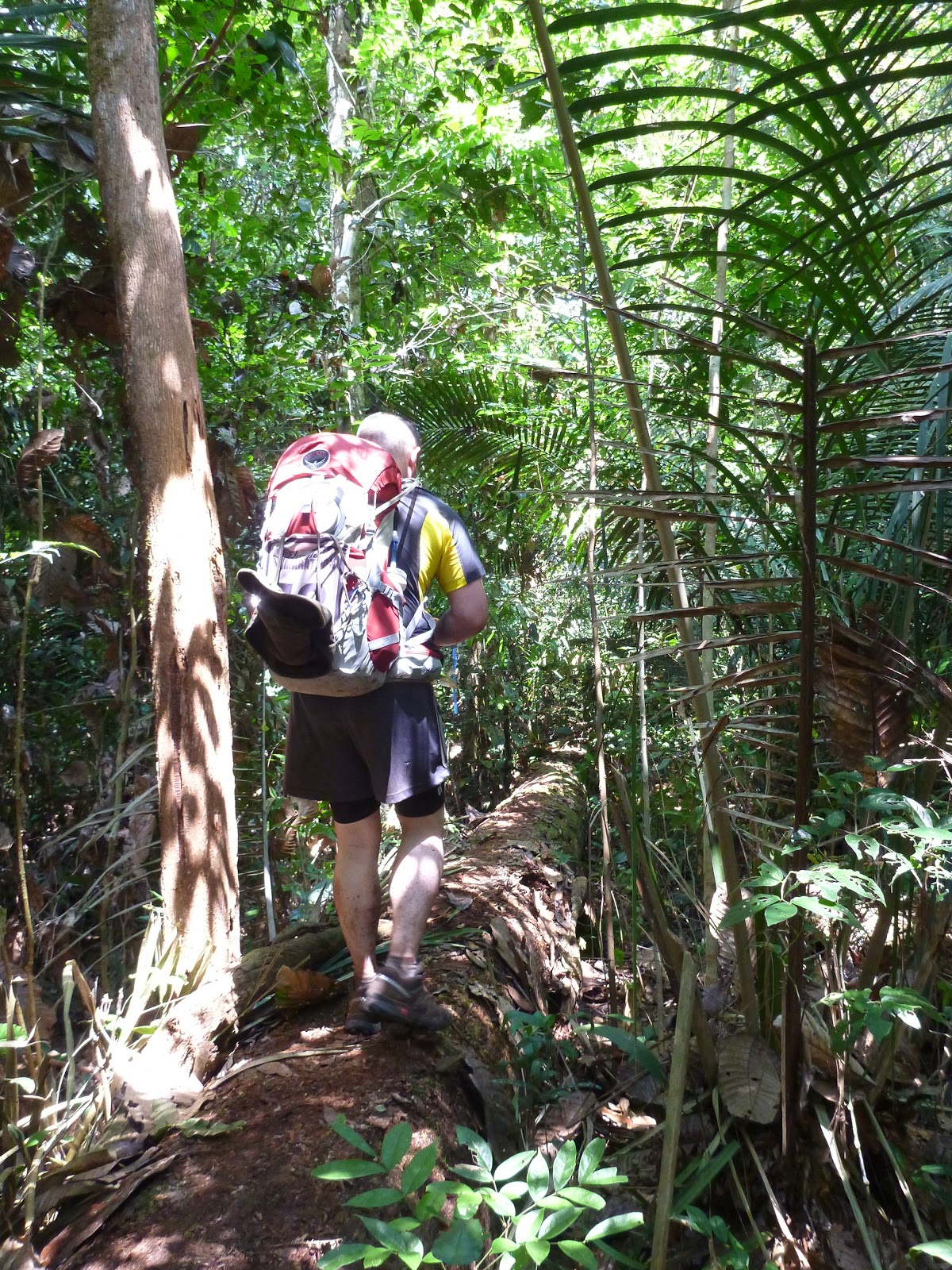 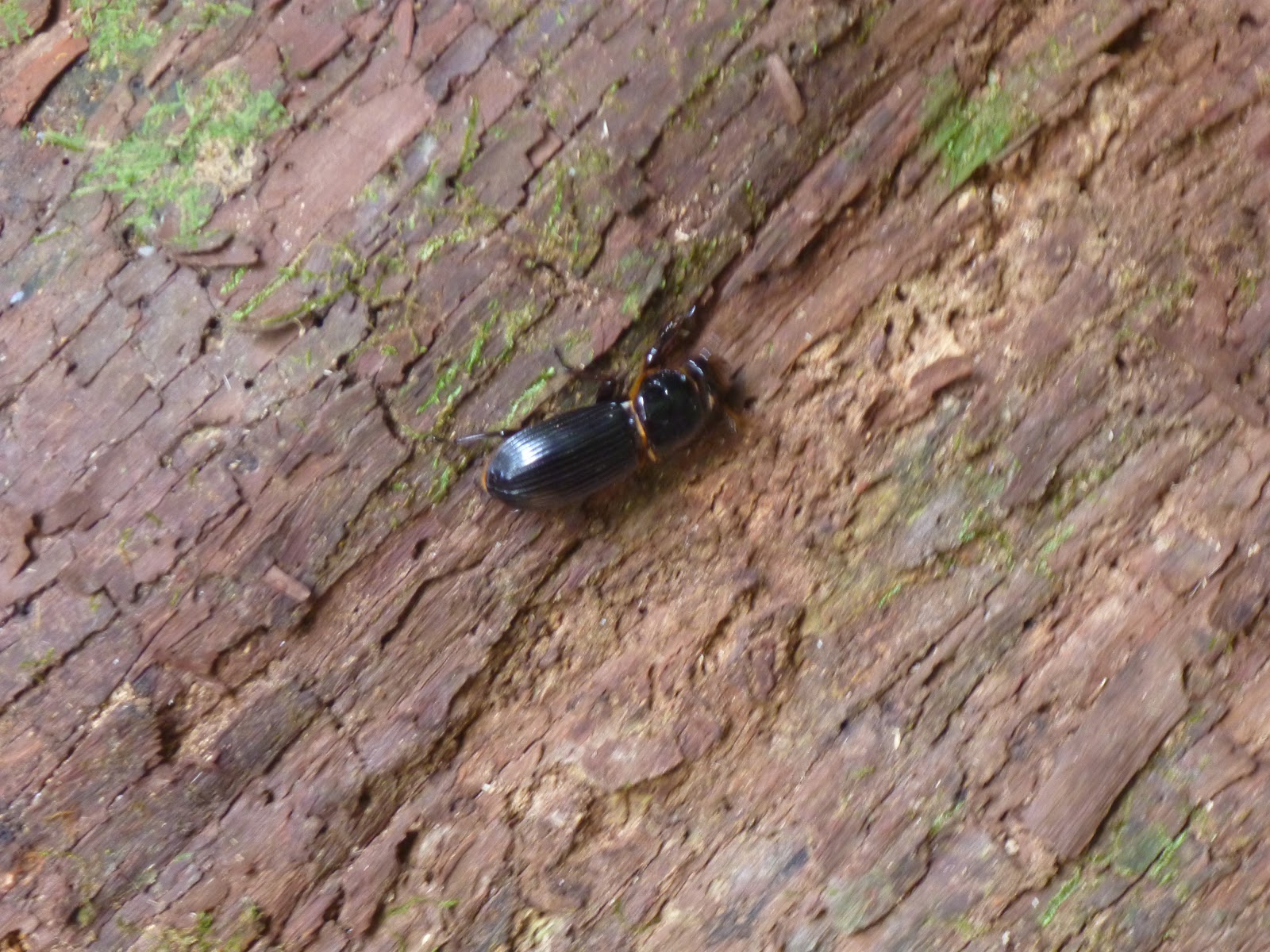 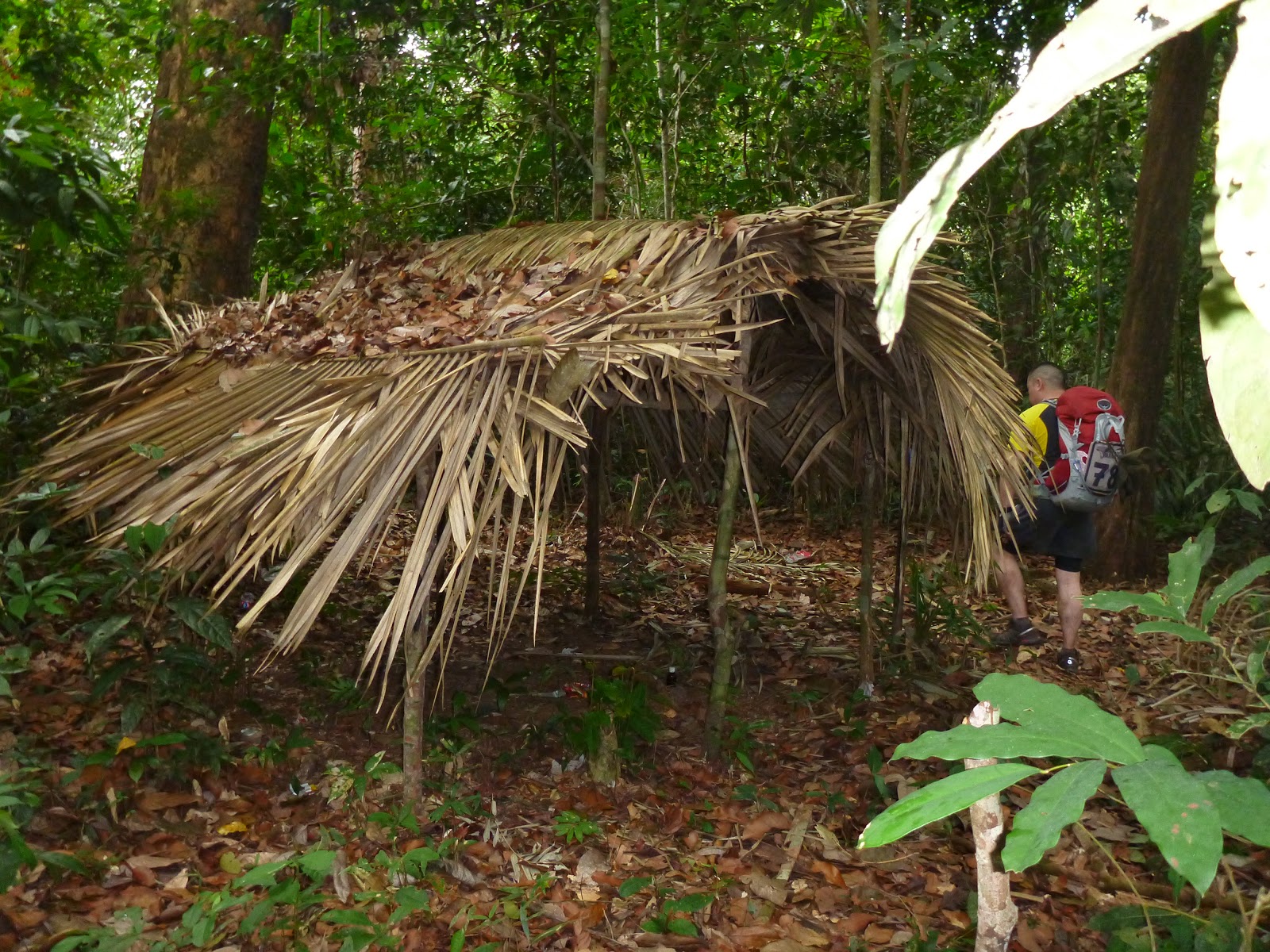 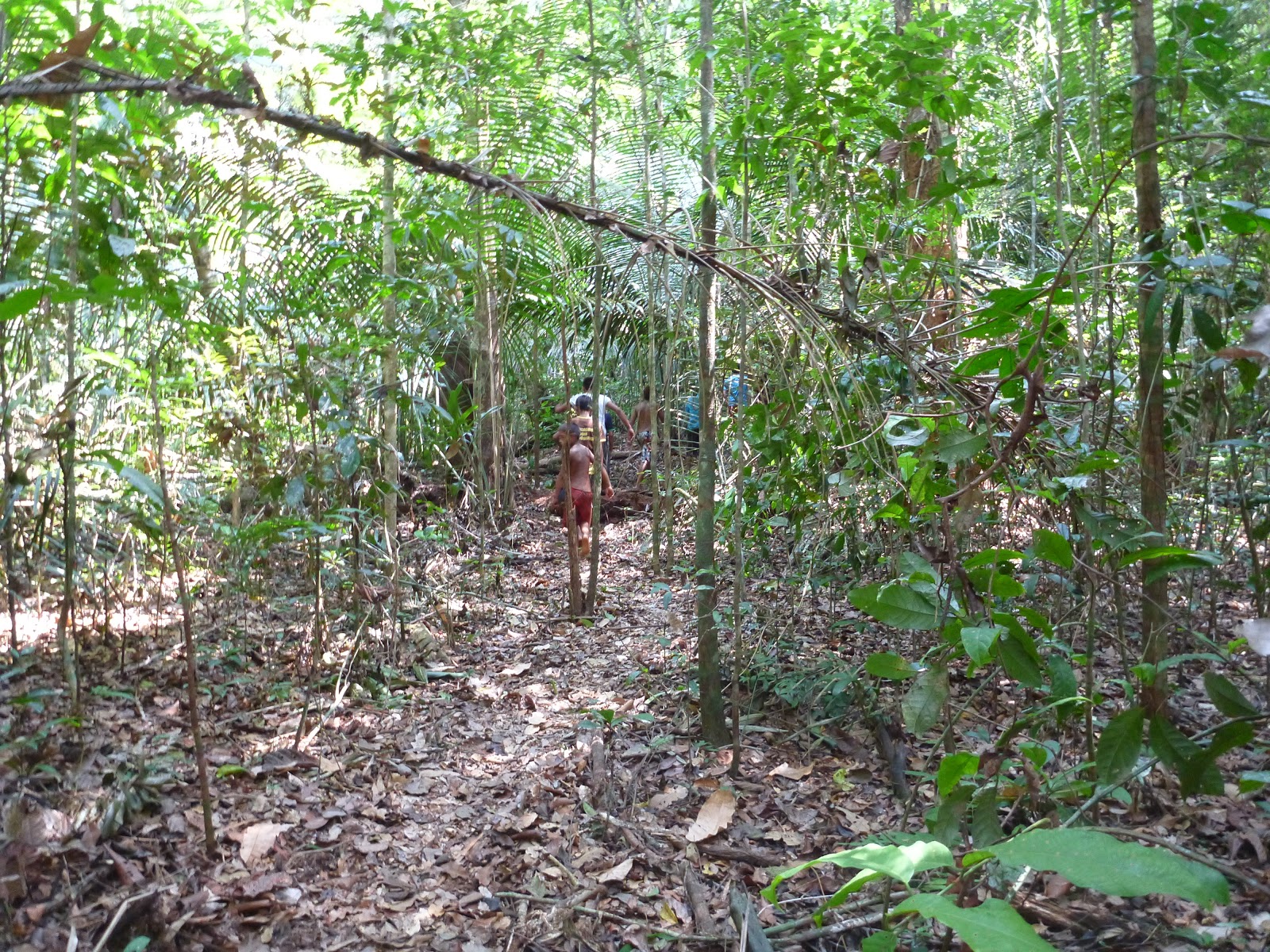 During the whole day I paced myself and took care about my food, drinks and heart rate all the time. After the 2nd checkpoint I only had 12km to the last check point to go and another 7km to the finish line so I decided to have a longer rest and put my feet up for at least 20 min.

Recharged with energy and more important, I was mentally ready for the last 12km out of 38km; I walked as fast as I could. Focusing on the last check point I managed the 12km in 3,5 hours.  My feet hurt from being already more than 10 hours on my feet but I felt great and happy to do 7km more to finish …but a discussion started. 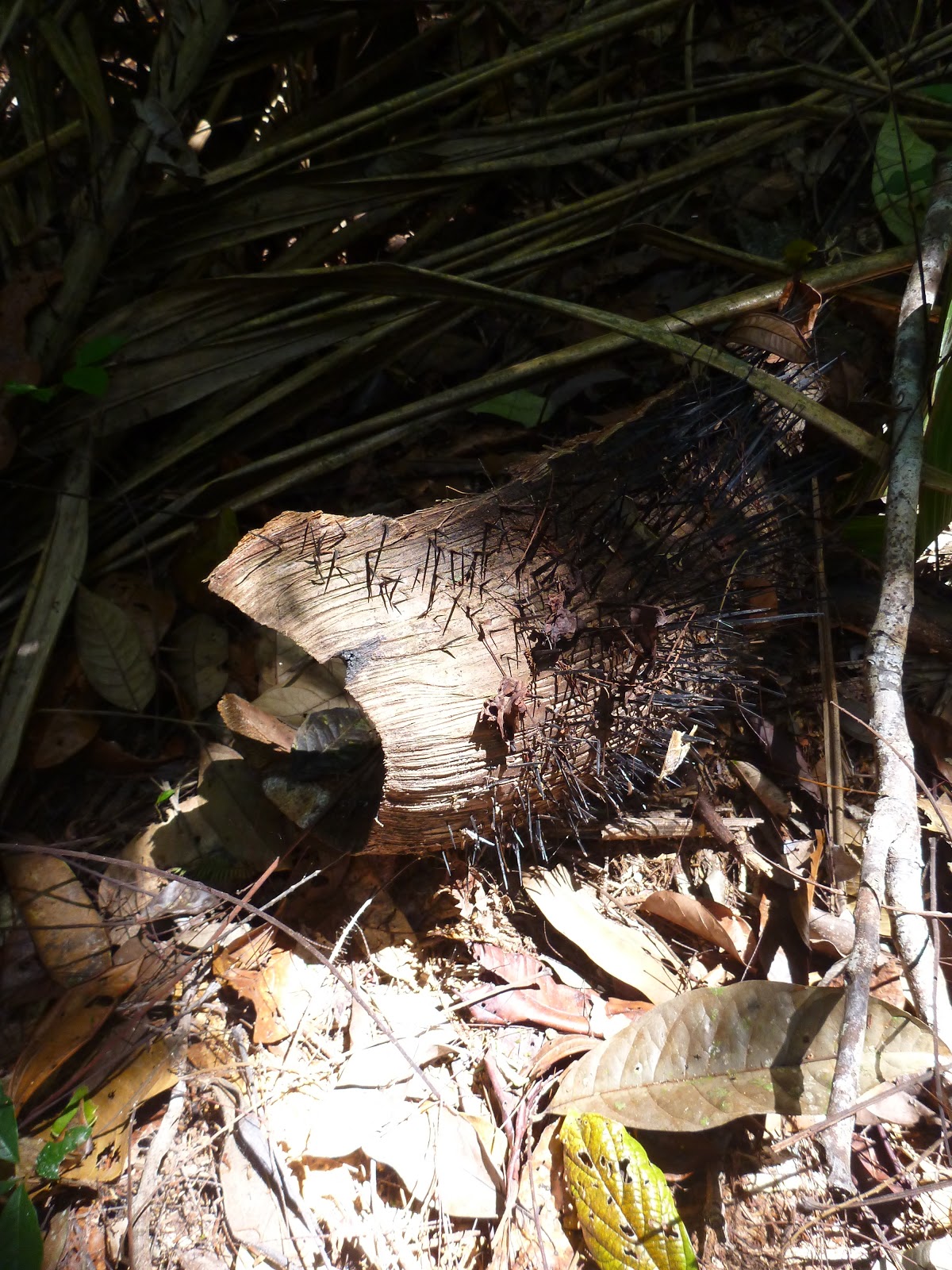 At the last checkpoint the volunteer didn’t want me to go on as it was already 5:30pm and in 1 hour it should be dark. I felt fine and didn’t want to drop out as I just had 7 km in front of me and I know the next day would be the river wading and swamps again which I was looking forward to the whole race.

The Brazilian guards were not able to or didn’t want to communicate via the phone to get Shirley. The volunteer wanted a confirmation from a doctor as well to confirm that I am able to finish the day without major risks. 30 minutes later all of a sudden a confirmation was there but without hearing someone speaking on the phone. Strange, but I remembered that Shirley explained to us during the briefing last night, that if anyone is late in the Jungle, we should wait and walk with the “sweep team”.

Now it was my decision that’s what Ms. Volunteer decided. I felt the pleasure. Either going with the others back to the bus on a save trip to the base camp, but dropping out of the race or finishing the last 7 km throughout the darkness within the deep Jungle in the Jaguar territory? Oh wow, what to do? Within seconds my mind told me to choose the save way but my heart wanted the Jungle and I wanted even more being able to attend the next day (my last day to finish).

Stressed and nervous I took my rucksack and started to walk with my local guards into the Jungle.  My heart frequency was high from the discussion and the decision I made. I told myself that’s what I wanted and that’s why I am here. I was not afraid but I ‘m just a very correct person.

Amazing, wow, I am in the Jungle at night! Finally I started to relax and tried to keep up the pace of the front guard. I had my head torch on and it was getting darker and darker. While listening to the sound of the night I realised that on the ground so many little spider were looking up to me. Unbelievable I never would have seen them during day time. The light of the head torch was reflected in the eyes of each spider, in different sizes them coming out of their hidden places. I was amazed and adrenaline pumped though my veins. Oh, yes that’s what I was looking for during my Jungle experience. 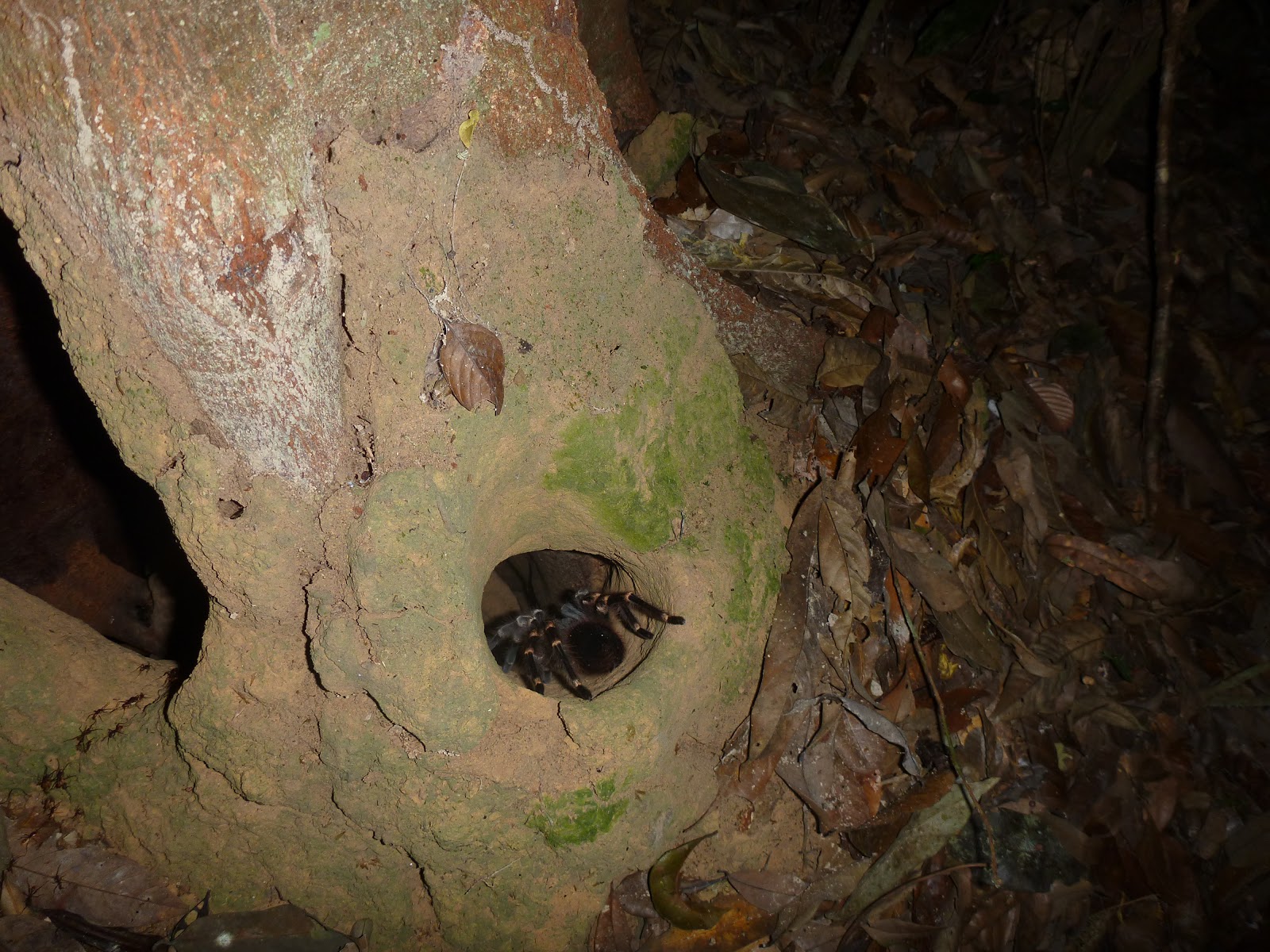 This was the best decision I made! I nearly forgot that I was already 12 hours on my feet and still had more than 2 to go. But hey, it’s worth it. And there it was; the front guard spotted a huge tarantula spider in a hole.  Beautiful! Don’t get me wrong I am not a fan of spiders, but that’s the wildlife I wanted to see here! 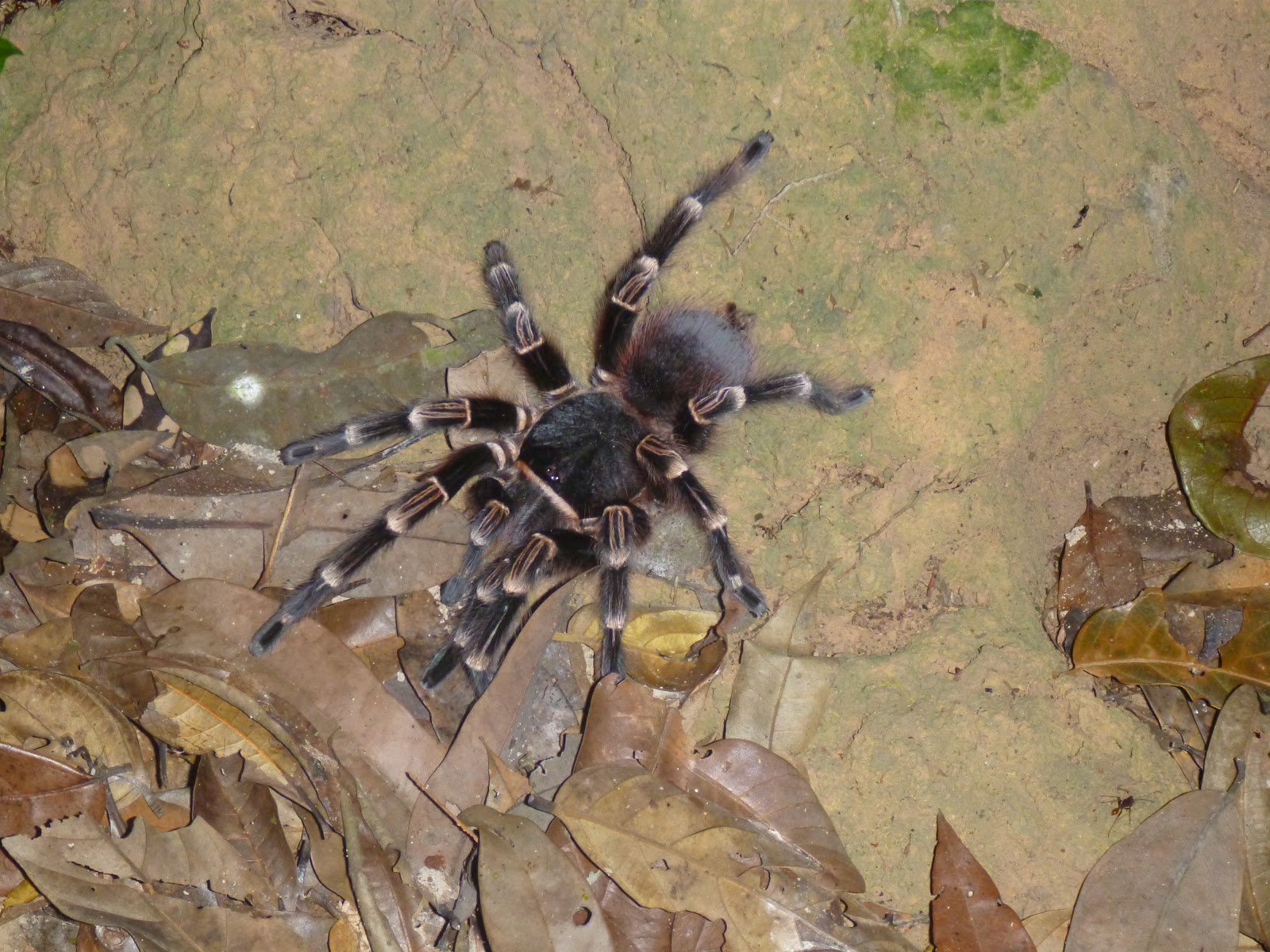 One hill to climb and then running flat to the base camp, we managed the 7 km in just 2,5 hours. My “sweep team” was great! One in the front and 3 behind me and they were singing their local rescue songs. Oh, what a night.

And when I finally arrived, after more than 14 hours on my feet, and reached the finish line, I was just happy! Light on me, camera on, so many people waited at the finish line and cheered for me. I felt like a movie star winning the race! But there was another day to go.

My team supported me and while they were hanging up my hammock and preparing my food I headed over to the doctor for a quick check up. My feet hurt from walking but other than that I was happy healthy and only tired.

No injuries, only one blister and I already was mentally ready for the next/last day. 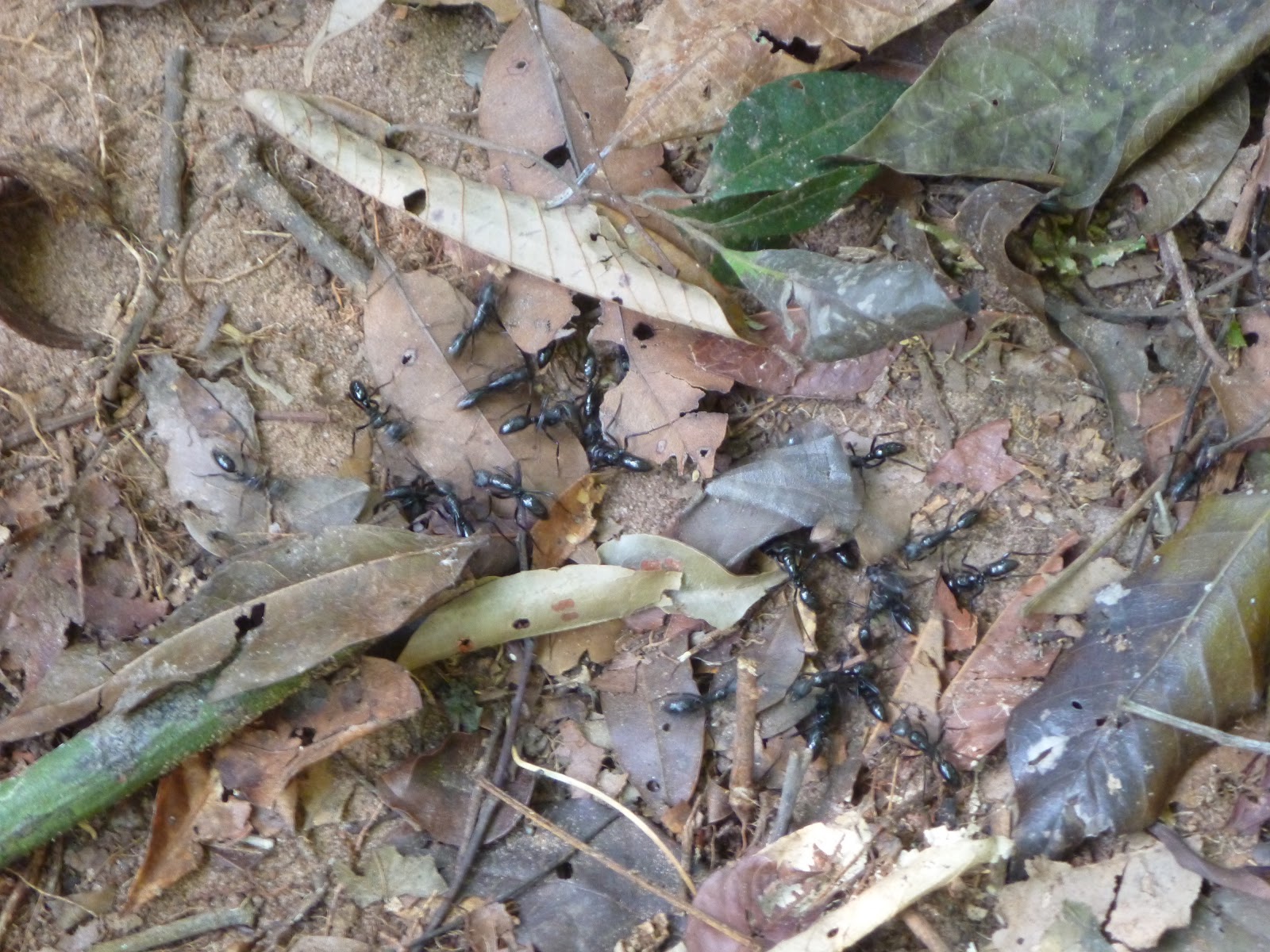 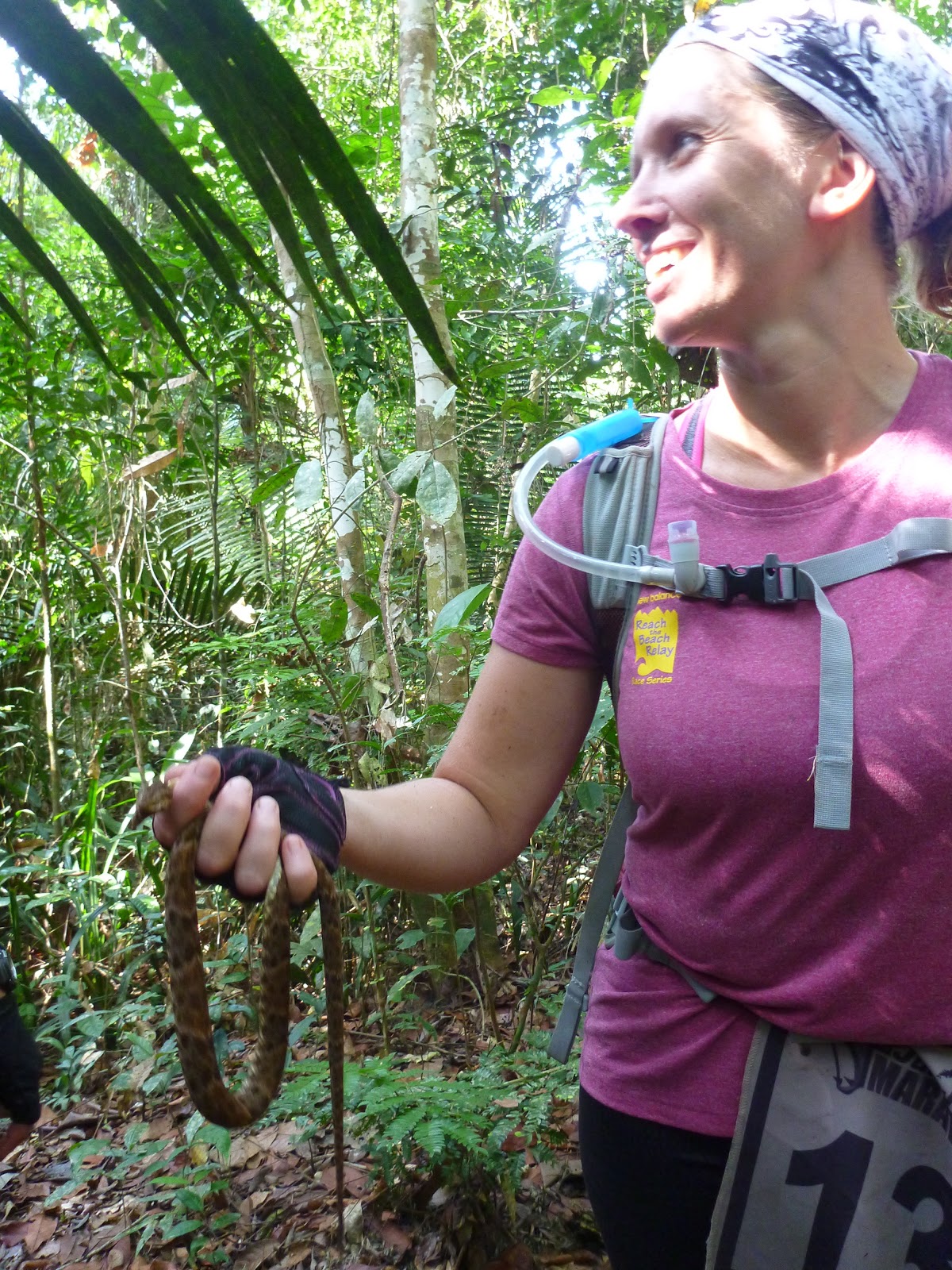 A dead poisones snake was found by the “sweep team” and handed over to the next check point by a competitor.