What a great day at the 31st Classic Athens Marathon!


A few days ago I arrived in Athens to visit my family but also to participate in the Classic Athens Marathon – 10km road race. 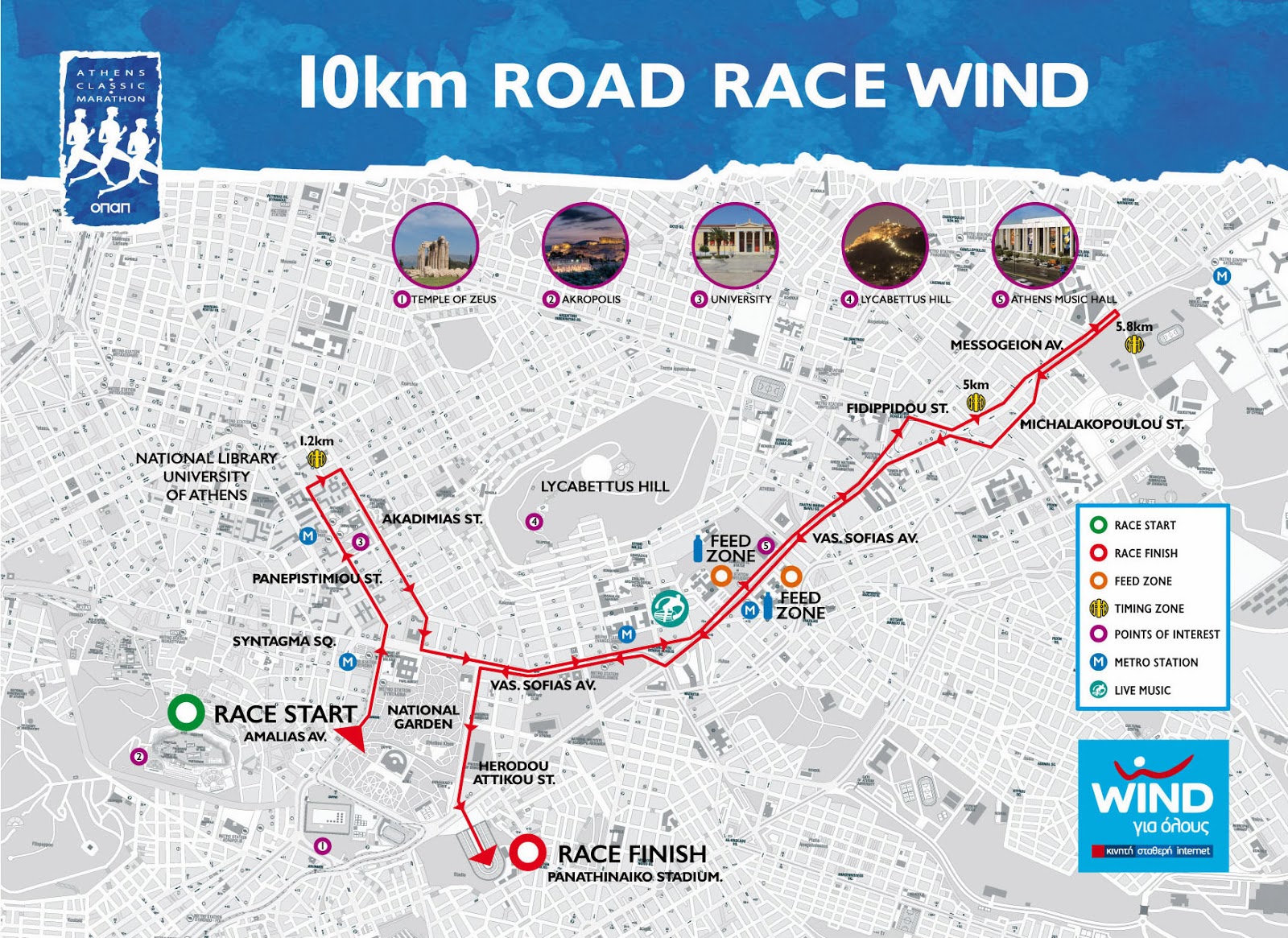 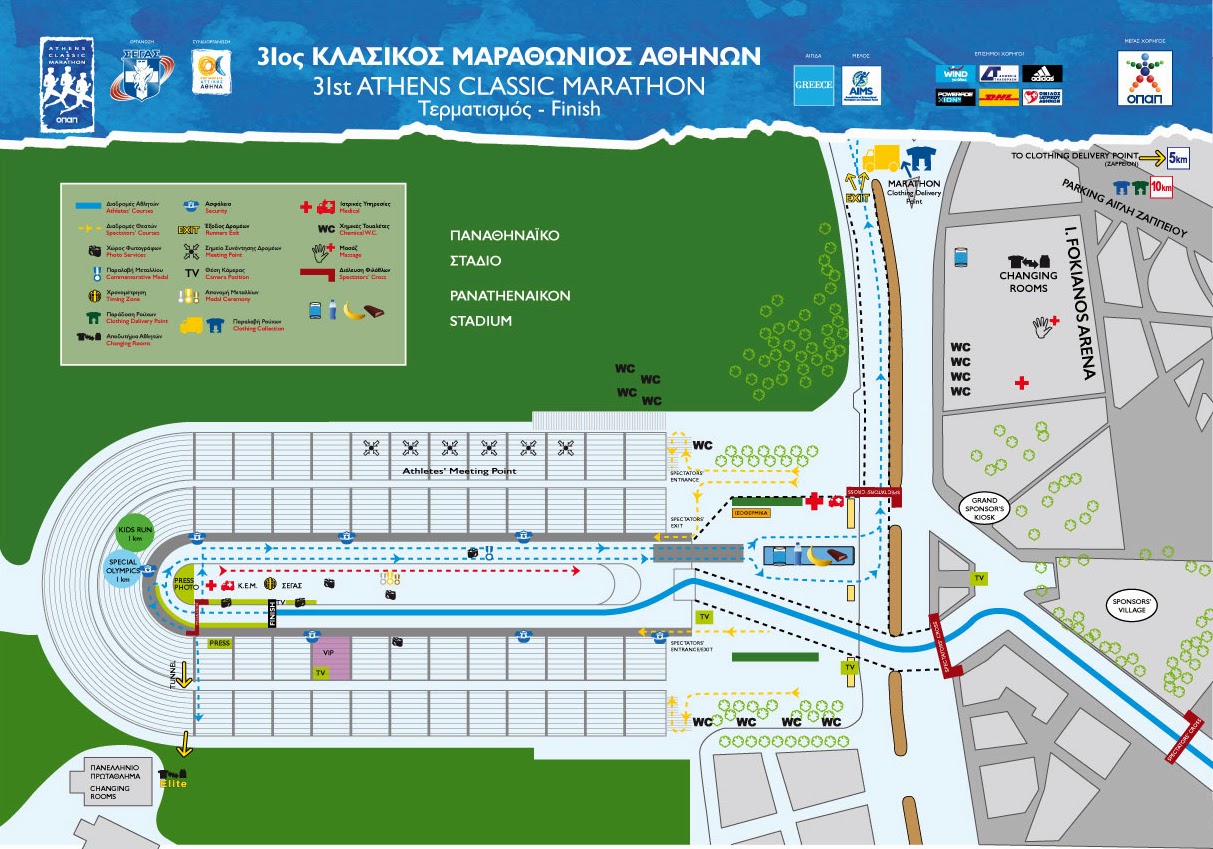 Finishing into the PANATHENAIKON Stadium 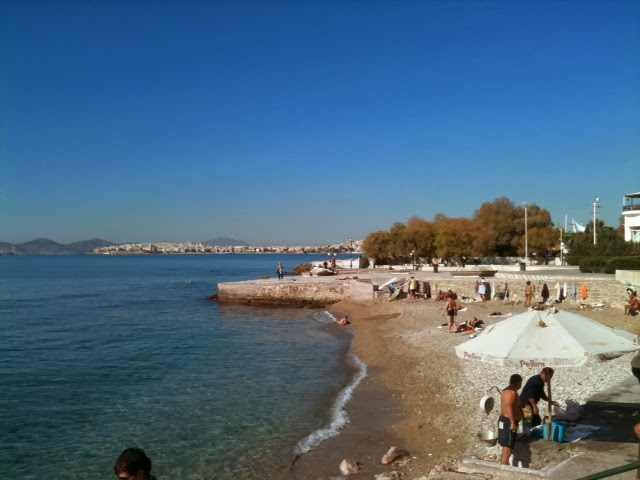 2 Days before the race I had my last run along the beach in the area Faliro. 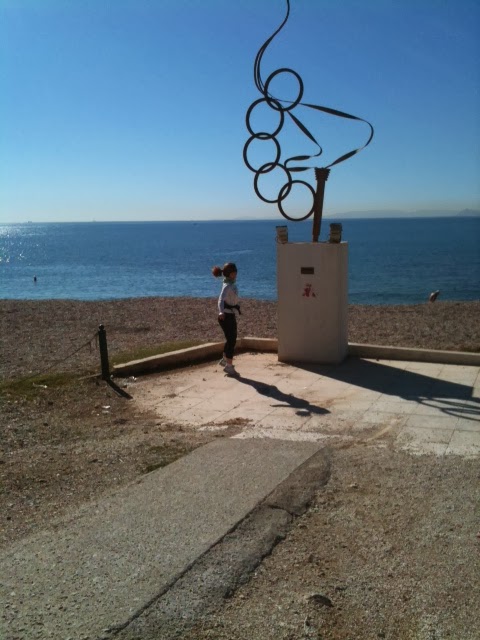 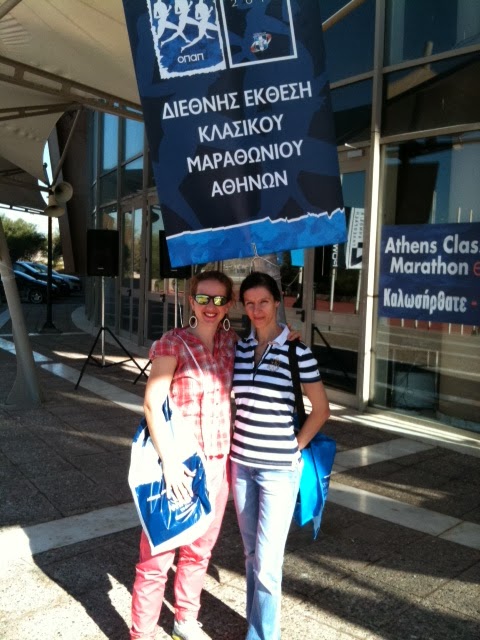 It was a huge event with thousands of people participating in either the 5km, 10km road race or the full Marathon. The start was organised and split into 4 blogs. Due to the personal best time each blog with up to 2.000 people were starting 2 minutes apart from each other. My bog was the third one due to my expected finish time of 1:03h. Therefore I was standing in the middle of max. 8.000 runners. Wow what a feeling.

There were music and balloons everywhere. The start time was at 09:05 in the morning and it felt like a big party with family and friends around me. When I arrived it was just in time to see the start of the 5km run and it was spectacular as you can watch in the video below. 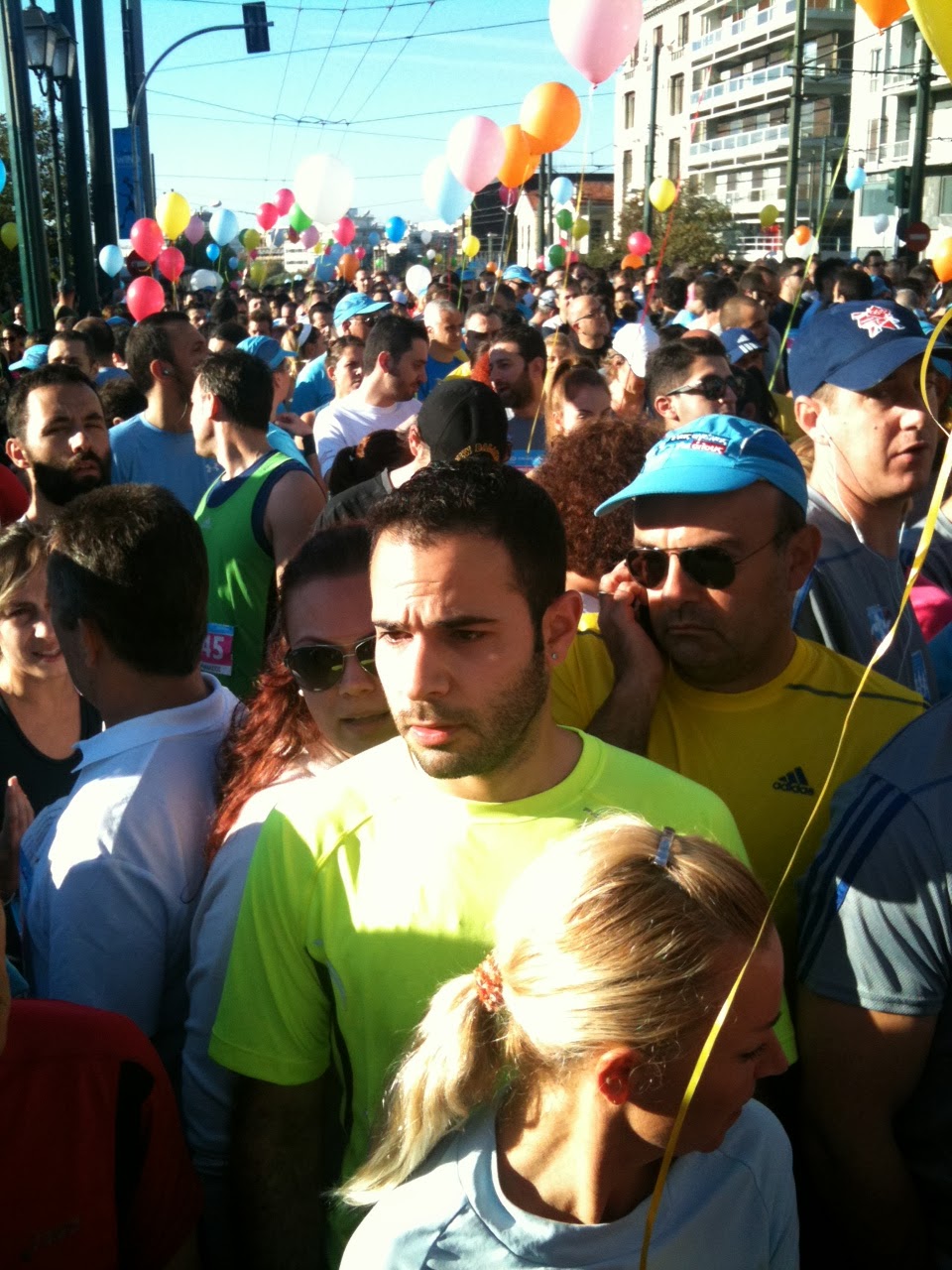 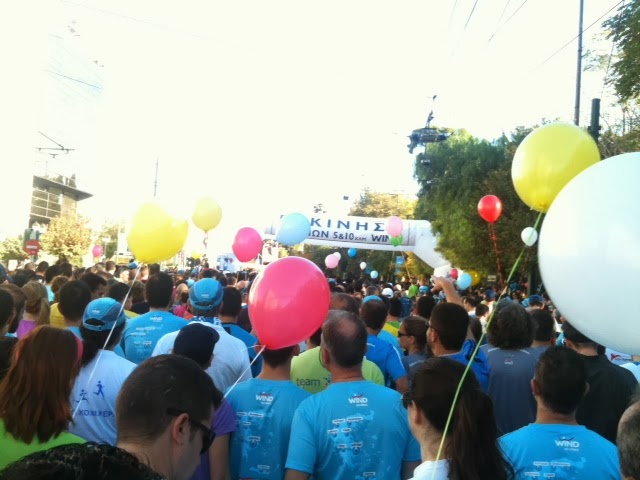 My view in the middle of blog 3 in front of the Start line.

VIDEO of the START will be uploaded soon!!


To tell you the whole story I would like to take you back a couple of month ago when the idea was born. It happened at work, I was chatting to a colleague about running training etc. when she told me that she had singed up for the Athens Marathon. My colleagues at work are very sporty in general. Every few month someone is running a Half-Marathon or training for an event and even the GM ran the London Marathon 2013.

Inspired by my colleague I thought, I would like to run the race as well or support her at the finish line and as I was planning to go to Athens visiting my family anyway, I arranged the dates to be in Greece on the 10.11.13.

Last year I finished the Jungle Marathon (short part: 121km), 4 days of managing myself though the Brazilian Jungle. https://www.mylifemychallenges.com/2012/08/uvu-jungle-marathon-2012-details-date.html Therefore I was thinking about running the Athens Marathon as well. After a few weeks I asked myself again and to be honest, my running experience was not that advanced although I went to the Jungle. It is a completely different environment to cope with compared to running a road Marathon of 42km in one go. And if I ever sign up for a classic Marathon I would like to run it, while in the Jungle you can’t run all the time due to the extreme environment of steep hills, uneven ground or swaps to go trough.

Finally, three month before the race, I decided to sign up for the 10km race. Why I waited so long, I don’t know, but what I know is how angry and disappointed I felt about myself when I had to find out that all places were gone. Of cause! This is one of the famous races and with the historical background and finishing into the original Olympic Stadium, it had to be booked out!

Sad but with hope I wrote an email to the organizer and asked if there would be any chance to get a place for the 10km – but there wasn’t any! 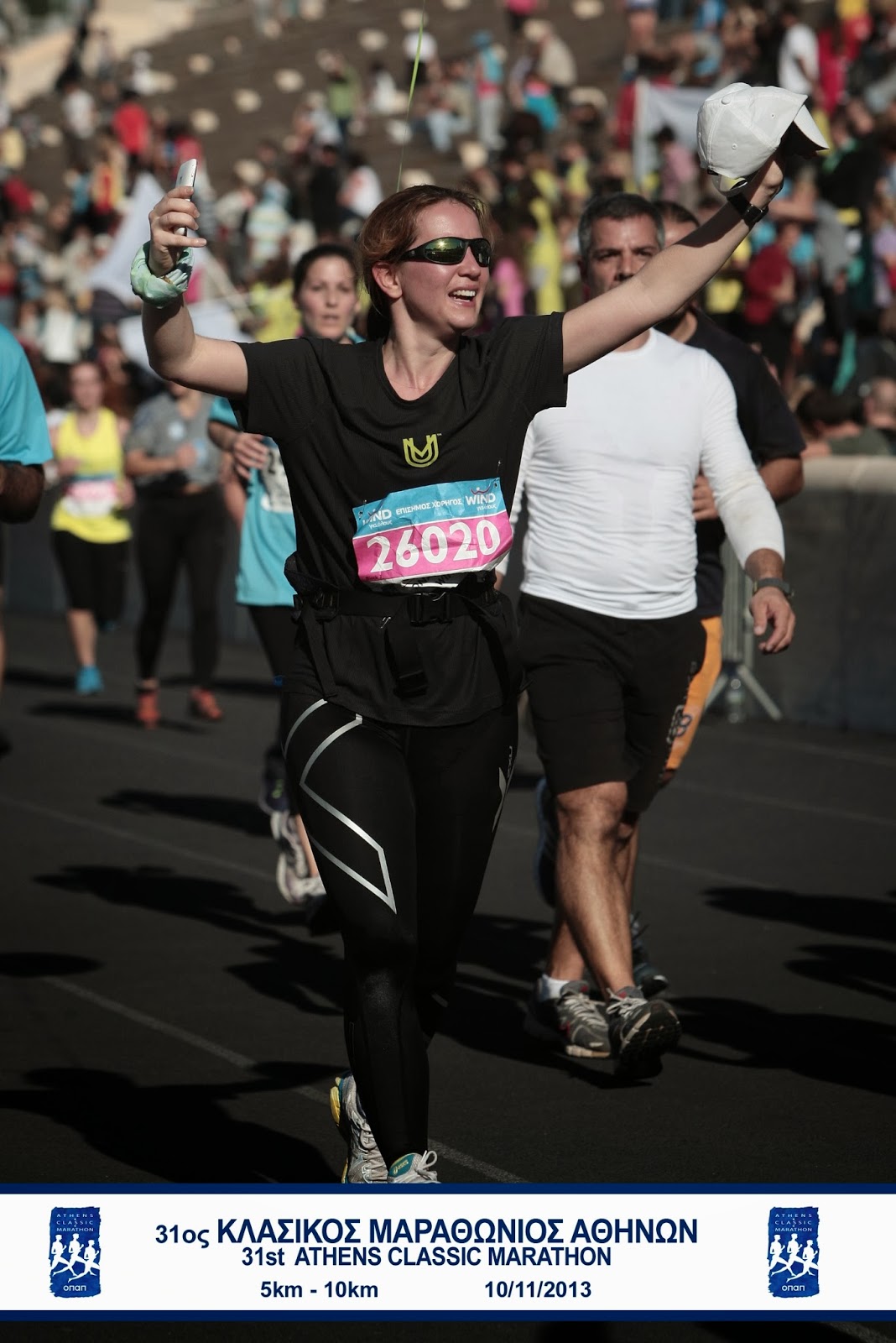 Now here it is, the story I still can’t believe. How lucky! I was so lucky, lucky, lucky!

It was a warm summer night when I went with friends to my local pub in London Maida Vaile. We had drinks, were chatting while we met 2 Greek guys. I was in a good mood completely forgot about the race until I was talking to them about Greece, Holidays and Athens. Mentioning my running plans and that I just missed to get a place, one of the guys turned around and said “The Athens Marathon? Maybe I can help?”.
You can believe it or not but his father was actually working as one of the organizer of the Marathon in Athens. We exchanged details and a few days later I had a place to run the 10km!
It felt like a “Lottery Win”. What was the chance to meet someone with a connection to the Marathon who could actually manage to get a racing place for me? A young woman Half-German-Half-Greek, living in London wanted to run the Athens Marathon (10km), met a Greek guy from Athens living/studying in London, who was able to organize a place in the race.

Thank you so much for the possibility to attend the race, an amazing time I had that day.

The start was a completely new experience compared to the smaller races I attended in London so far. With thousands of people around me the start was slow. Until I could run properly it took a moment but luckily the road was very wide. The first half of the race was on incline maybe 2% and the sun was shining with a temperature of ca. 23* C. Throughout the run there were always so many people around me. A few people already started walking after 10min. Although I felt very hot and was surprised by the incline going on for such a long time, I said to myself that I would never stop as it is only a 10km run, but I rather slow down my pace. Luckily I had my bag incl. water bladder around my waist to hydrate whenever needed. As I got very hot and my heart-rate was at 180 most of the time, I decided to cool myself down by pouring a water bottle over my head when I reached the water station. That was amazing. I felt so refreshed and remembered the time in the Amazon when I reached the checkpoint and the support team helped to refresh the runners throughout the day.
Nutrition wise I had a light breakfast incl. a Banana, coffee and just before the race I took a gel. After half of the race I took another gel to keep the energy going. Happy and with a very satisfying feeling I was running into the PANATHENAIKON Stadium to finish my run with a time of 1:05h.

My family was waiting at the finish line and that made my happiness complete!

A few hours later I was waiting in the stadium as well to congratulate my colleague and her friend to their amazing Marathon achievement. Well done! 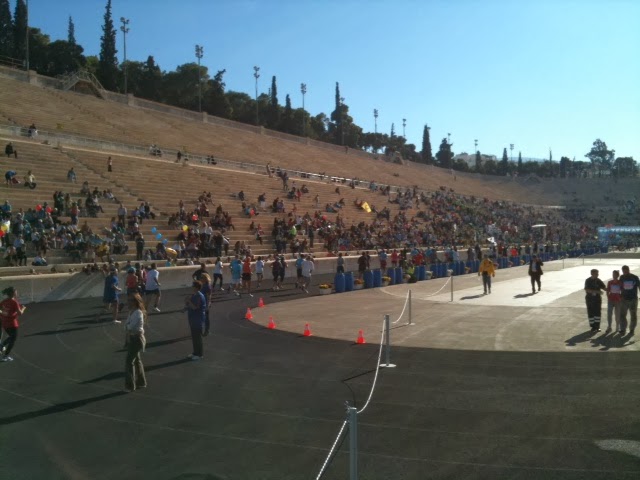 VIDEO 2 will be uploaded soon!! 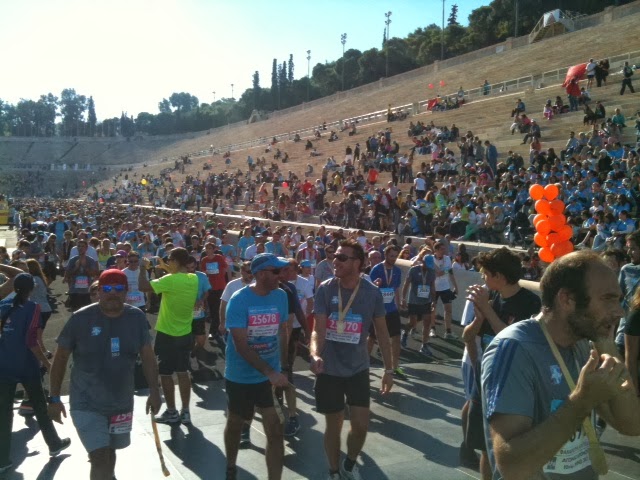 VIDEO 3 after the FINISH line will be uploaded soon!! 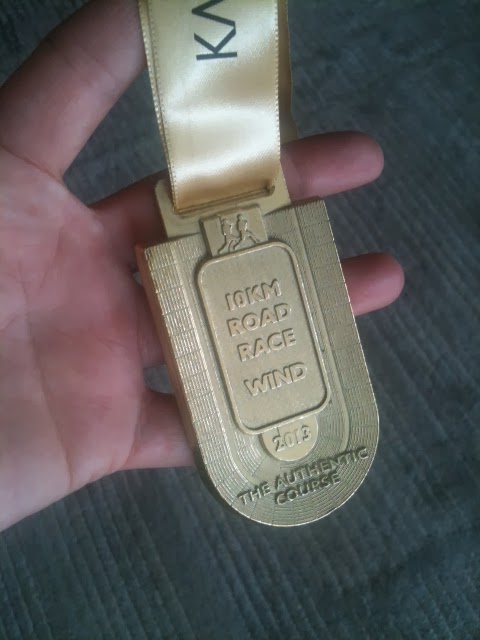 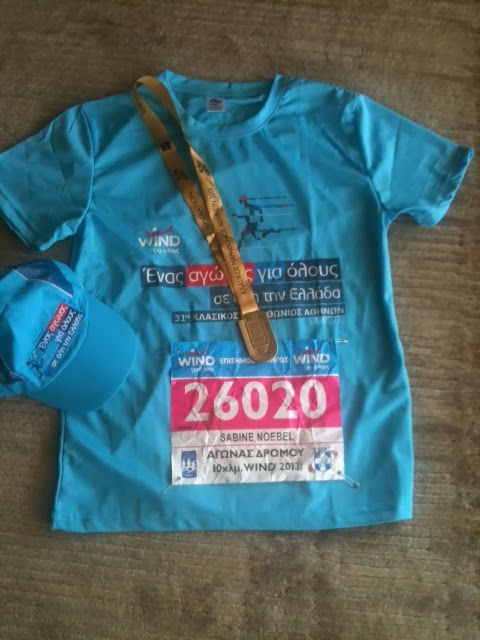 The marathon course is based on the myth from which the race gained its name: Pheidippodes, a messenger in Ancient Greece, ran from the Battle of Marathon to Athens to announce the Greeks’ victory over the Persians and died afterwards.

(read the full history at Wikipedia)